Cristina Bravo: There’s nothing a determined Huskie can’t do 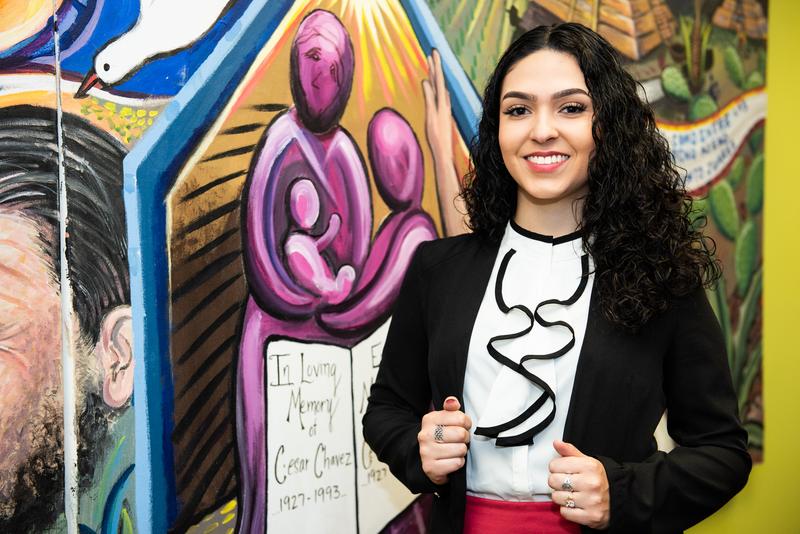 Cristina, ’22, has tackled the challenges of being a first-generation college student head-on. Born in the U.S. to Mexican parents, Cristina moved to Mexico with her family when she was very young. After spending most of her childhood there, she returned to the U.S. at the age of twelve unable to speak English.

Young Cristina threw herself into her education. Her freshman year at NIU, she placed second in an English composition contest. Her essay was published in an anthology, and her picture graced the cover of the book.

“At twelve I couldn’t speak English, and by college I could speak English at a level that I could place in a contest with native speakers,” she says. “Whenever I think, ‘I can’t do this,’ I have this example I can look to that proves I can accomplish whatever I set my mind to.”

In high school, Cristina was intimidated by college. She felt conspicuous visiting majority-white campuses. At NIU, she says, that self-consciousness disappeared.

“NIU is predominantly white, but I don’t feel out of place here,” she says. “There’s so much diversity running through every aspect of the university. I love that NIU truly values and celebrates its diversity. I felt welcomed here.”

In addition to the welcoming environment, Cristina was drawn to NIU for its Foreign Language Residence Program. After graduation, she intends to be a Spanish teacher, inspiring students to learn and embrace not only a foreign language but associated cultures and traditions as well.

“I was so impressed by FLRP. I really wanted to be a part of that program,” she says. “It’s great to live with other people who share your passions.”

Cristina says she is inspired by NIU students’ dedication to making an impact in their community and in their world.

“A Huskie’s presence is always noticeable because Huskies do everything with passion,” she says. “That’s what it truly means to be a Huskie.”

In Cristina’s Impact Scholarship application, Associate Professor Franciso Solares wrote that she will be “the type of alumna that makes NIU proud.”

“It’s not just her academic promise and work ethic I find praiseworthy, but also her activities outside the classroom,” he wrote. “She will never deny help to anyone, and she will always perform her duties following her strict personal ethics code.”